Giving Tuesday 2019: Naming Rights for the Rest of Us

Hot on the heels of the public launch of Light the Way: The Campaign for Catholic University, we presented Naming Rights for the Rest of Us, an opportunity for the everyman (and everywoman) with grand ambitions!

Many people may not be ready to make the kind of gift that would put their names on a building, plaza, study space, or even a library carrel. But with Naming Rights for the Rest of Us, everyone had the chance to bask in the glory of a named gift.

In celebration of Giving Tuesday 2019 (December 3, 2019), our community members made gifts to The Fund for Catholic University for the opportunity to add their names to the most famous — or infamous — campus places, aspects, or concepts. (From here on out, we'll refer to them, in general, as "places.")

These places needed some love and attention; our community members needed their names to be publicly lauded; and The Fund for Catholic University needed (and continues to need) our community's support to make upgrades and improvements to even the most "special" places on campus.

Below, we're shining a light on the places that were named — may they inspire us for eternity! 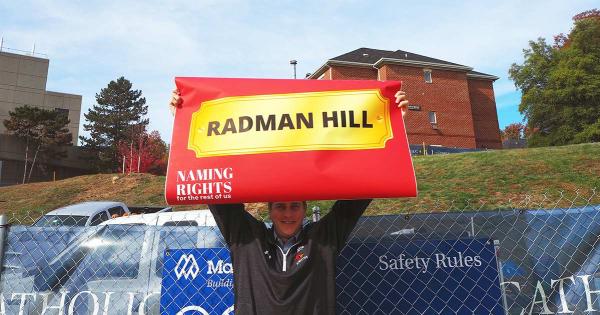 Radman Hill
Named by Patrick Dwyer, B.S.B.A. 2007, in honor of a friend who took a nosedive down the entire length of the hill between CV and the Pryz. Patrick assures us that Radman was fine and stresses, "It was a purely comedic moment." 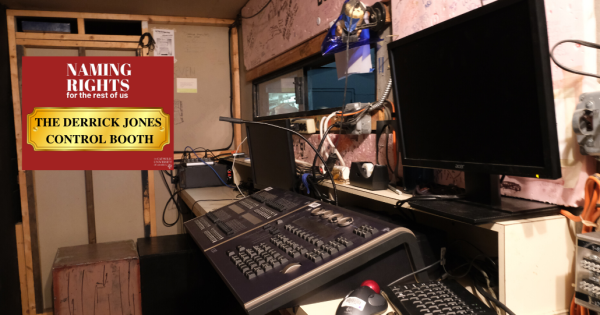 Derrick Jones Control Booth
"I spent more hours in the Lab Theatre control booth than likely any other room in the Hartke Complex or on campus. [...] Seventeen years later, I can walk into the booth and it still feels like home." At last, this control booth is home for Derrick Jones, B.A. 2002. 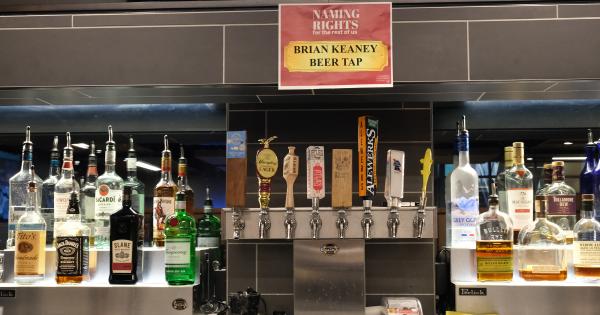 Brian Keaney Beer Tap
On Tuesdays during Lent, Brian Keaney, B.A. 2003, visited The Rat after Mass. "Some of the best conversations I had in my four years were spent drinking that cheap beer." Now, Brian has established a spiritual successor by the Dan Lyons, Class of 2003, bar rail in Murphy's Grill. 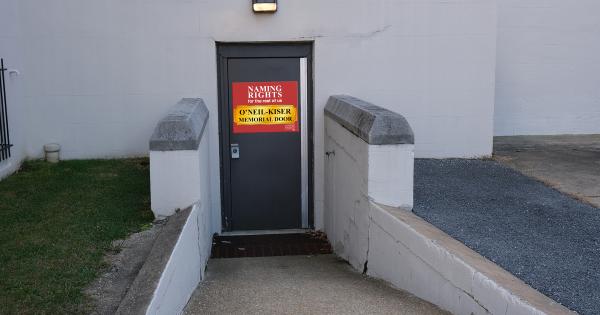 O'Neil-Kiser Memorial Door
Seth Kiser, M.A. 2012, Ph.D. 2015, worked alongside Katy O'Neil, B.A. 2013, all day in O'Boyle Hall. But they became friends outside this doorway, where they'd stop to chat before heading home. Kiser preserves "the memory of the numerous occasions where we first got to know each other." 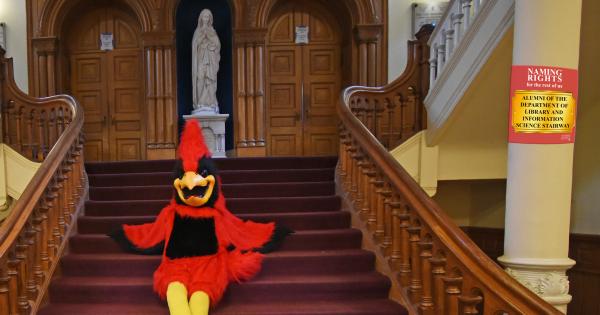 Alumni of the Department of Library and Information Science Stairway
Nicholas Brown, M.S.L.S. 2017, notes that Caldwell Chapel fosters the same values as LIS alumni: "ensuring the public's access to safe spaces for personal growth and the acquisition of knowledge through our work in libraries, archives, educational institutions, and cultural heritage institutions." The stairwell is a perfect symbol. 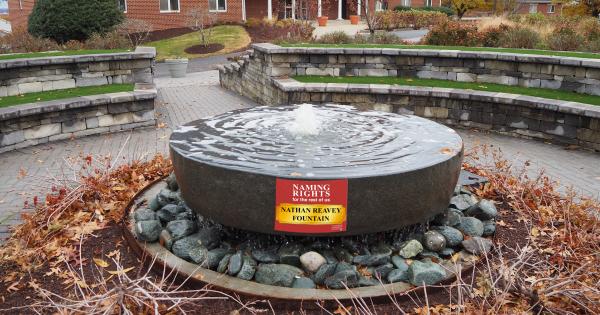 Nathan Reavey Fountain
Where does Nathan want to go to school? The nine-year-old is quick to answer, "Catholic University, where my mom works!" When Kristin Reavey works nights or weekends, young Nathan often comes along. One day, he played in the fountain at CV and refused to leave even when Kristin's was finished! 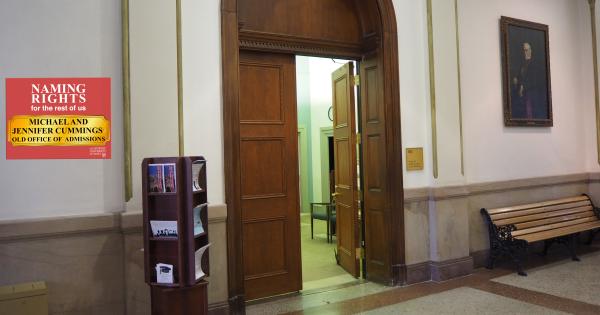 Michael and Jennifer Cummings Old Office of Admissions
Michael Cummings, M.A. 2009, and Jennifer Cummings, B.A. 2004, sought employment at the Office of Admissions. By the time they left, they were dating and shared a wellspring of wonderful memories, including the "best view of Pope Francis when he visited." Now the former office in McMahon is theirs. 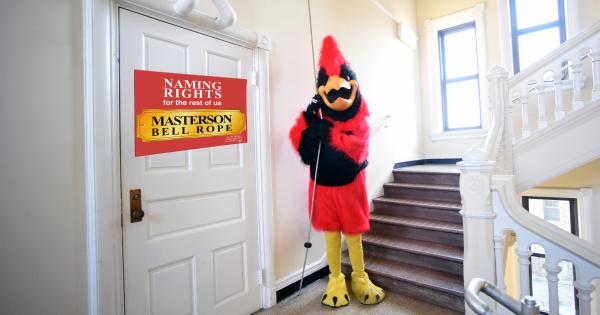 Masterson Bell Rope
Caldwell Hall was Catholic University's first building. But Mary Kate Masterson, B.S. 2019, considers it just her third favorite building. She made many friends in these halls, but "never got any work done." For her, this non-functioning bell rope is a kindred spirit. 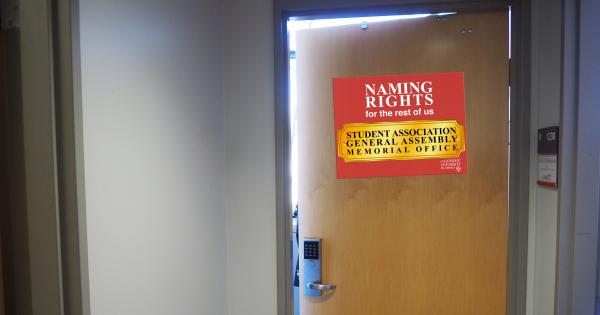 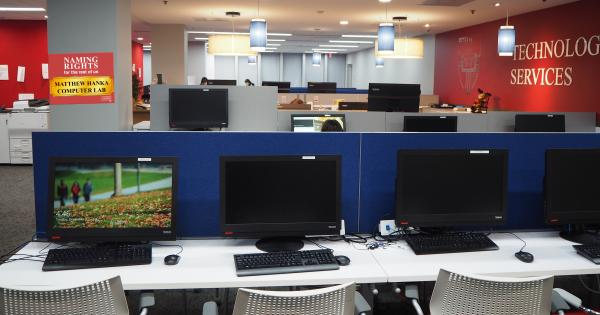 Matthew Hanka Computer Lab
Matthew J. Hanka, B.A. 2002, spent more than a little time in this computer lab in Leahy Hall. Because he didn't have a computer, he'd come here to type papers and socialize with friends and classmates. Eventually, he became a lab monitor. Now the lab bears his name! 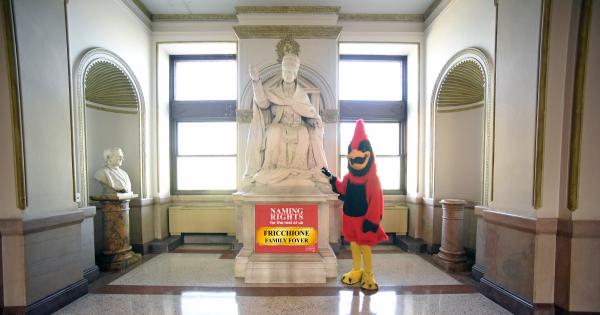 Fricchione Family Foyer
When he accompanied his older sister on her campus tour, Patrick Fricchione, B.A. 2014, M.S.B.A. 2015, was awestruck by the statue of Pope Leo. She didn't enroll at Catholic University, but later, he did. He became a Cardinal Ambassador, starting and ending his tours at this spot. 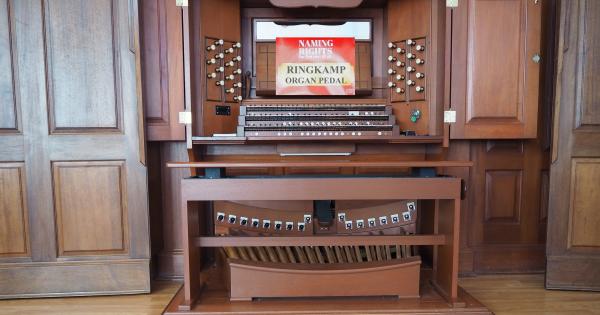 Ringkamp Organ Pedal
Nathan Ringkamp, Class of 2023, is a proud organ performance major. His father, Chris, jokes that Nathan is obsessed with the largest, deepest pipes. By making this gift in Nathan's honor, Chris has given his son the left-most pedal of the organ in St. Vincent de Paul Chapel. 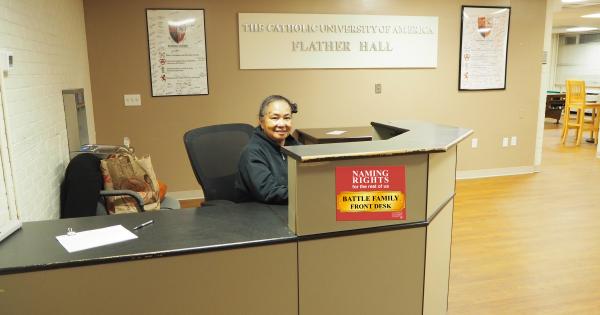 Battle Family Front Desk at Flather Hall
Late at night, Keely Battle, B.A. 2006, often found herself stationed at the Flather front desk for her work-study job. Her now-husband would jaunt down the hill to keep her company. Now during late nights, they are awake with their beautiful baby daughter! 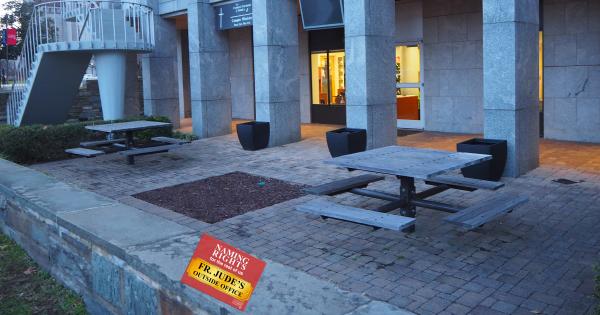 Fr. Jude DeAngelo's Outside Office
Diet Coke, Camels, and Fr. Jude: At the Seton Hall Patio outside Campus Ministry, you can have conversations that are "filled with hearty laughs, quick banter, empathy, and the occasional tear." The staff of Campus Ministry names this "outside office" in gratitude of this son of St. Francis. 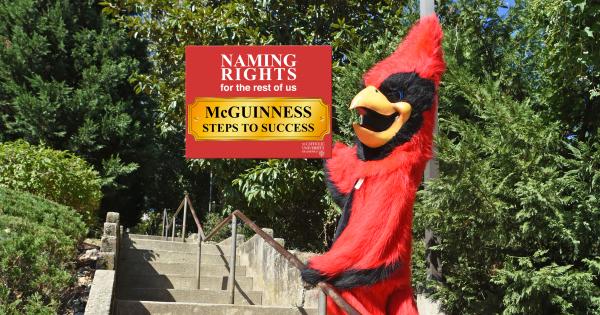 McGuinness Steps to Success
Sheila McGuinness, B.A. 1990, credits these steps to O'Boyle Hall for her 30 years of achievements in the workforce. "Those steps were my personal life workout of body, mind, and soul." The steps challenged her and prepared her to be a teacher. Climb, students, to your success! 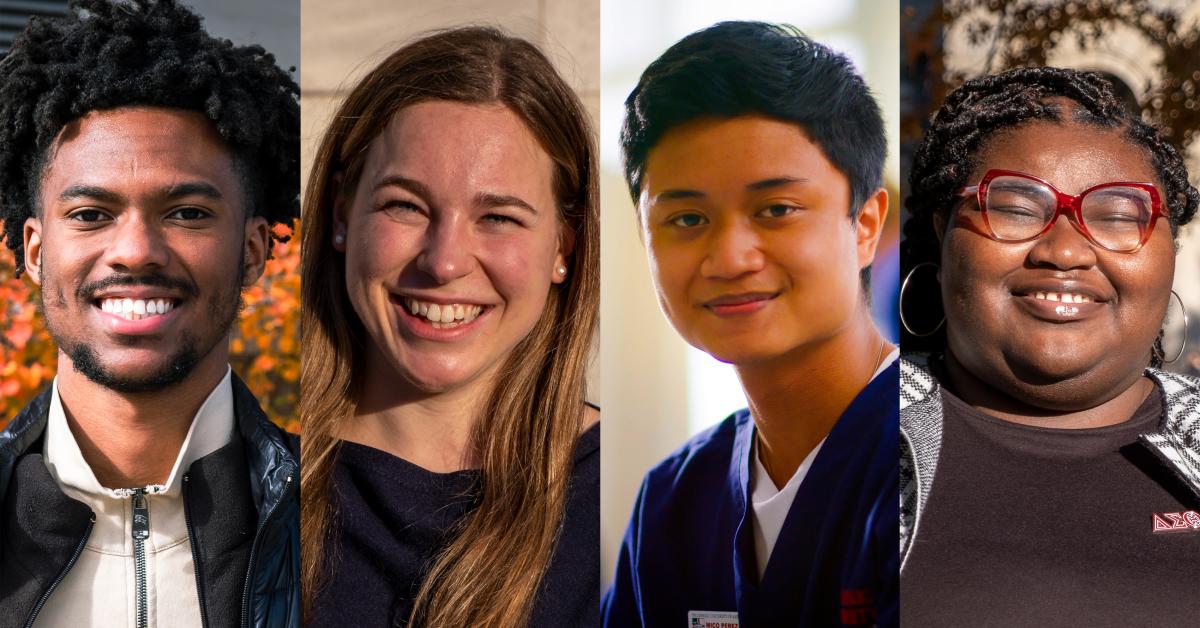 December 01, 2021
On Giving Tuesday 2021, 189 donors contributed more than $75,000 to student scholarships at The Catholic University of America. These generous donors have opened the University's doors to even more young people.
Read More 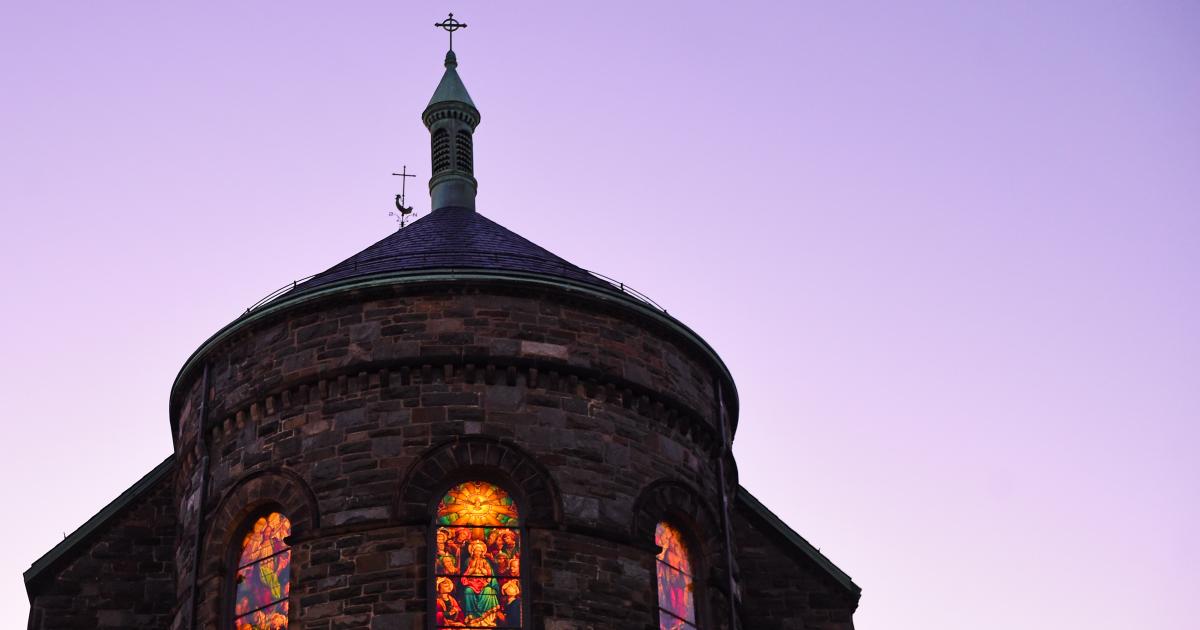 December 11, 2020
In 2020, thanks to a matching gift made by a donor parent couple, Giving Tuesday focused on only one thing: the restoration and preservation of Caldwell Chapel.
Read More 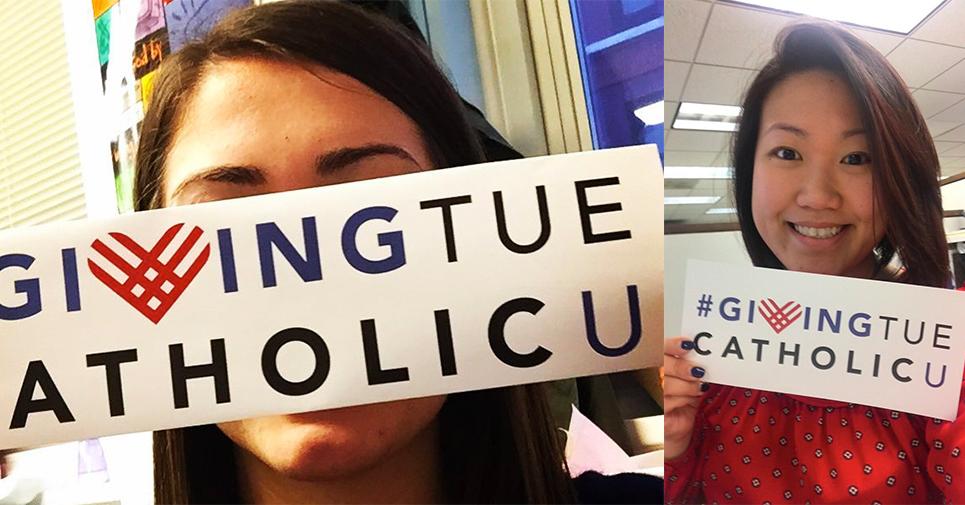 Giving Tuesday: Humbled by Your Generosity

Thank you for your generosity! On November 27, 2018, you set a new Giving Tuesday record for The Catholic University of America:

These numbers tell only part of your impact 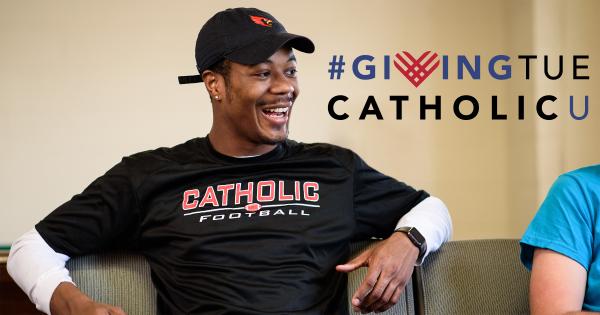 Giving Tuesday
Giving Tuesday marks the start of the end-of-year giving season. Show your appreciation for Catholic University by making a gift on the Tuesday after Thanksgiving.
Questions? Suggestions? 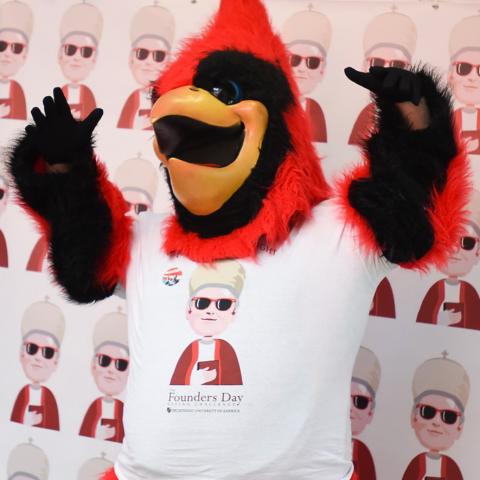