December 5 was a red-letter day for Catholic University, when the Cardinal community celebrated the opening of Garvey Hall, the long-awaited new campus dining commons. It was also the day that Garvey Hall opened to hungry students as the University’s main dining space.

Garvey Hall replaces The Eatery in the Pryzbyla Center, which seated fewer than 200 at a time. In contrast, Garvey Hall features both indoor and outdoor seating areas and offers space for 490 students to dine simultaneously.

The space is named for the University’s 15th president, John Garvey, and his wife, Jeanne. The former president, his wife, and many of their family returned to campus for the ceremony.

Garvey Hall is also home to the Center for Academic and Career Services, and the suite of rooms where it is centered is named for Jeanne Garvey.

University Chaplain and Director of Campus Ministry Father Aquinas Guilbeau opened the dedication ceremony with a prayer and blessed the new building.

“Lord God Almighty, in your kindness hear our prayers: We dedicate this building today to the education of youth, the progress of the sciences, and to learning. Make it a center where students and teachers imbued with the words of truth, search for the wisdom that guides the Christian life, to strive wholeheartedly to stand by Chirst as their teacher, who lives and reigns for ever and ever, Amen,” he prayed.

University Trustees Elizabeth Meers and Juan Jones offered thanks to the many donors whose gifts made the building possible. In total, 30% of the building’s $40 million cost was funded through philanthropy, including an anonymous donor couple who made an $8 million gift to the project and suggested the building be named for the Garveys.

“We’re calling it ‘Garvey Hall,’ but a lot of other people did the work,” John Garvey said, including donors, University architects, and staff. “I tried to head this off. At a meeting last year, I asked the anonymous donors if they had a favorite saint they would like to name the building after. There was sort of an embarrassed silence, and then they said ‘We were thinking we’d like to name it after you and Jeanne.’ I said, ‘It might be a better idea if we were dead,’” which inspired laughter from the audience. Humor aside, the former president was moved to be so recognized. 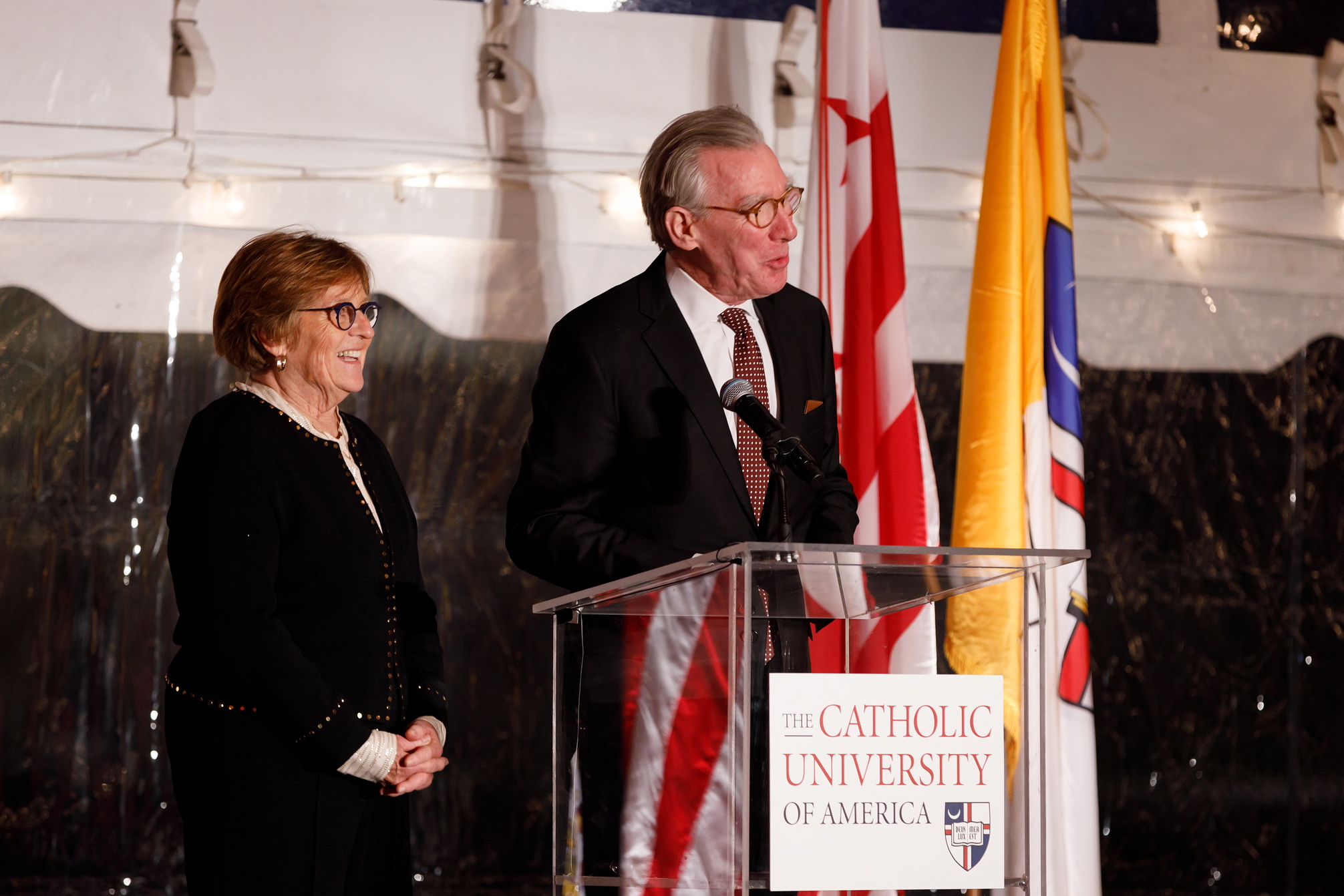 “Thank you for the great honor of attaching our names to it.”
— John Garvey, former University President

Other donors who received thanks from the podium included the Smith family — Board of Trustees Chair Victor Smith, J.D. 1996; his father, Trustee Emeritus Van Smith; and his sister, Susan Smith Newell, J.D. 1993, M.A. 1994, and also serves on the Columbus School of Law Alumni Council and is a past Board of Visitors member for the school — who contributed $1.2 million to name the West Dining Room for past University President Father William Byron. The Giessuebel family — Brian and Frances, who serve on the Parents Council and School of Theology and Religious Studies Board of Visitors, along with their son, Joseph, a member o the Class of 2023 — also were recognized for their gift which named the Guissabel Tower Dining Room.

The event also saw the announcement of a special honor for a dedicated University employee. Ms. Willie Joyner has been with Catholic University for nearly 50 years. As a result of a love for generations of University students, several alumni have kickstarted a drive to name the East Dining Room in Ms. Willie’s honor.

“More than 40 years ago, I worked while I was in college—like most of my fellow students here. In 1980, in my sophomore year, I started working in what was then Cardinal Dining Hall, in charge of beverages at lunchtime. I loaded big cardboard containers of milk into dispensers, and swapped out empty Coke canisters for full ones at the soda fountains."

“Ms. Willie Joyner was my coworker, greeting students at the door and punching the paper meal plan cards we used to carry,” said Ed Gillespie, B.A. 1983, who launched the campaign with the help of Vinny Sica, B.M.E. 1983, and Mary Jo Parino, B.A. 1983, and their respective spouses, Kathy, Ellen, and Rich.

Gillespie said he was the first in a long line of Ms. Willie’s “babies,” students she cared for as if they were her own.

“Forty-nine years of Willie Joyner not just serving food for young stomachs, but nourishing young souls with love, and filling young hearts with joy. So when I and some other alumni learned that the University was building a new dining hall, we all agreed we should do something to honor Willie.”
— Ed Gillespie, B.A. 1983 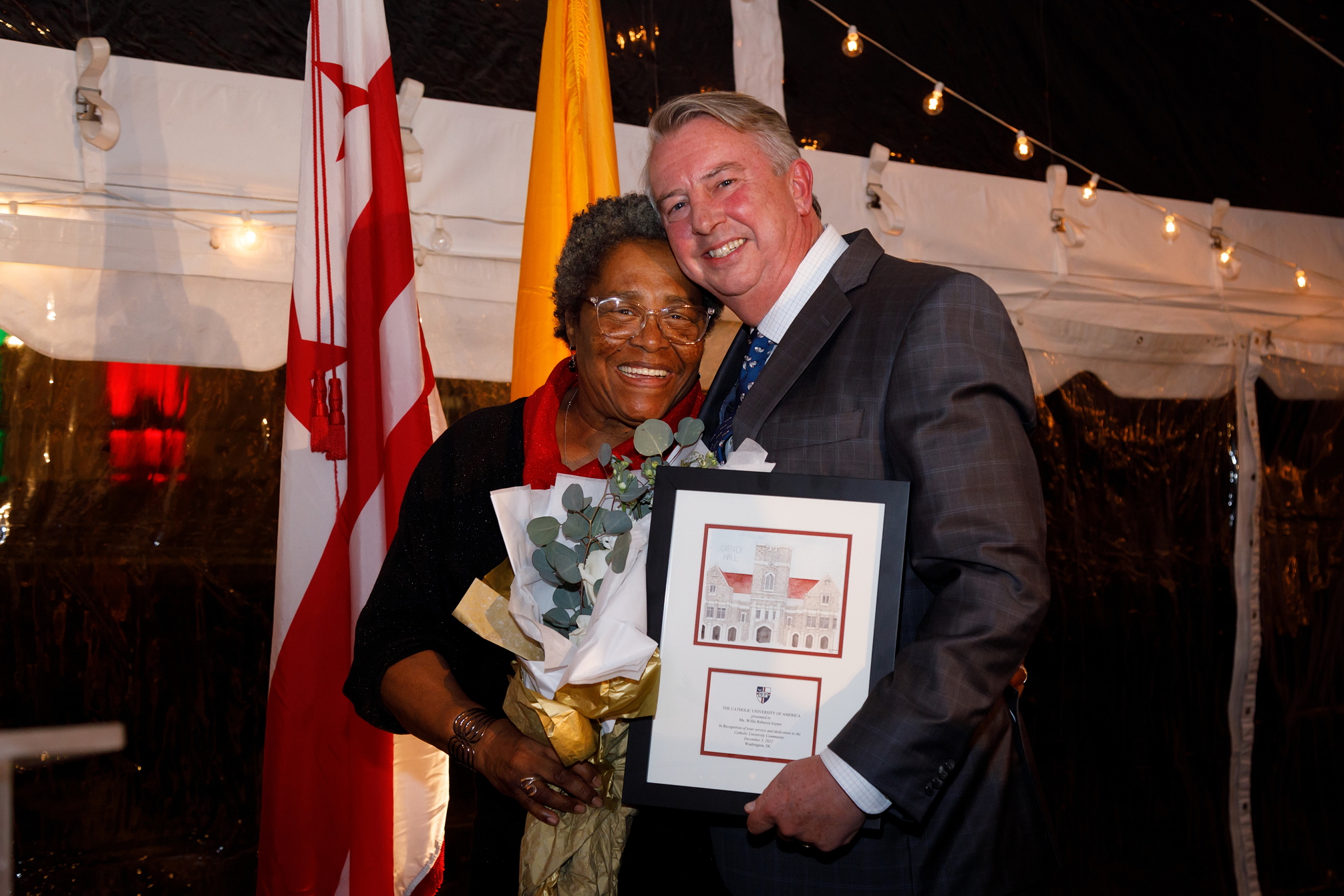 President Peter Kilpatrick thanked Mr. Garvey, and all his predecessors, for leaving him a firm foundation upon which to build. Kilpatrick also said that Garvey Hall — “one of the finest facilities built in higher education this year” — would be a different type of classroom for Catholic University students.

“Our community is the greatest asset that we have,” Kilpatrick said, adding Garvey Hall will become a special home for CatholicU students. “And the most important learning is not done in the classroom, but with others, after classes: what’s my vocation, who will be my best friends, who will I spend the rest of my life with? 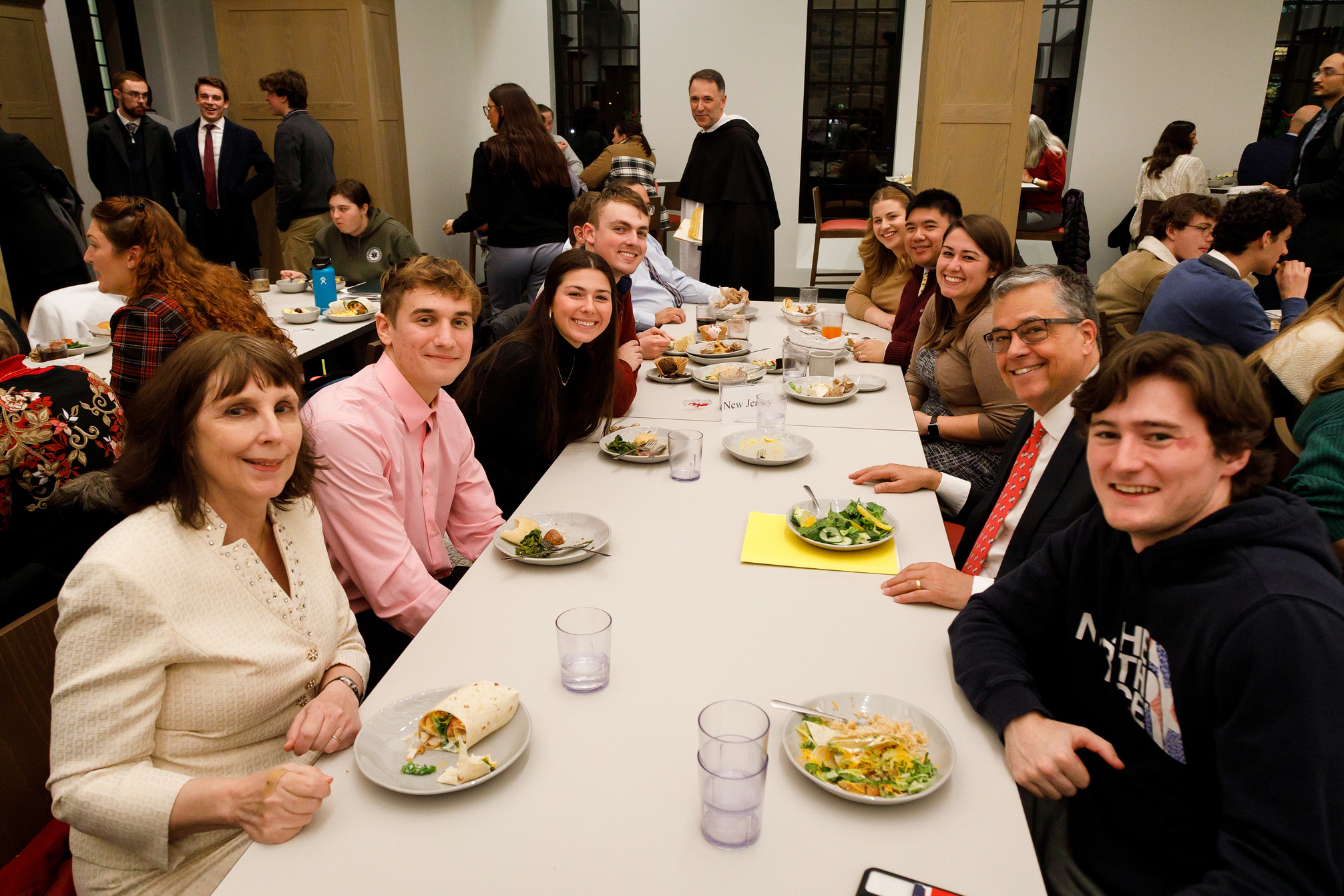 Students, including event emcee Tony Crnkovich, packed the space, watching as the Byron Dining Room was blessed. The other spaces within the building were blessed earlier in the day.

“It’s a beautiful building,” said Crnkovich, president of the Student Government Association and a member of the Class of 2022.

“I think something that all the students realize is that it adds this profound, transcendental element to our education, and it directs our eyes upwards. And I think that’s very fitting, for what President Garvey did these past 12 years.”
— Tony Crnkovich, Class of 2022 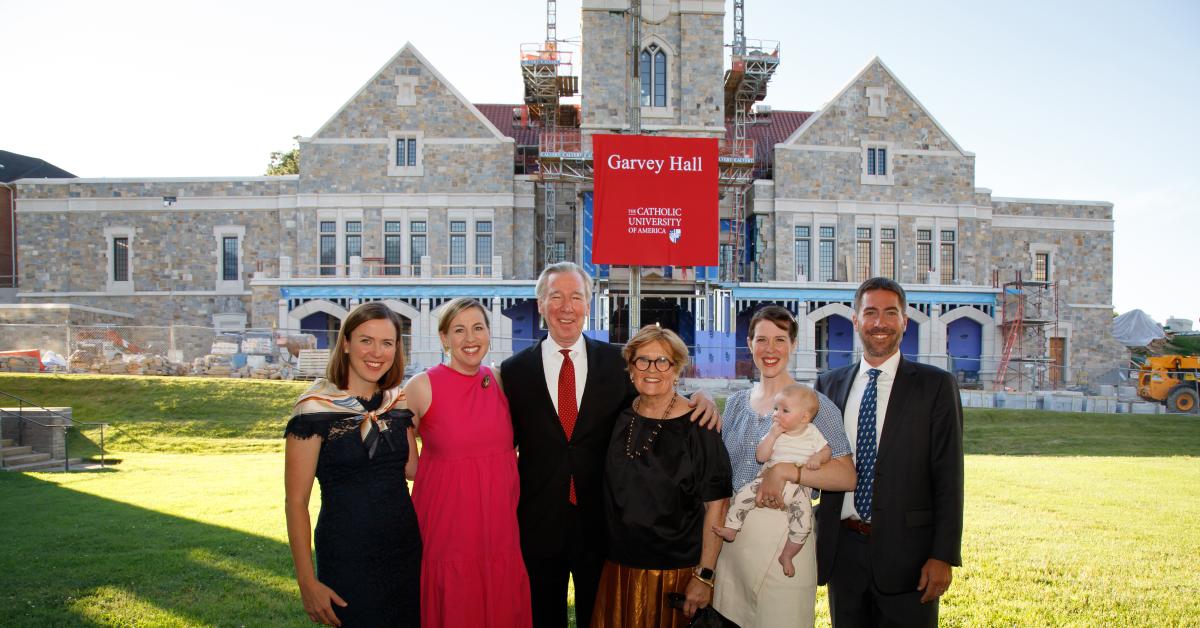 June 07, 2022
On June 4, The Catholic University of America announced that the new campus dining commons, currently under construction and scheduled to open in fall 2022, will be named Garvey Hall in honor of outgoing University President John Garvey and his wife, Jeanne Garvey.
Read More 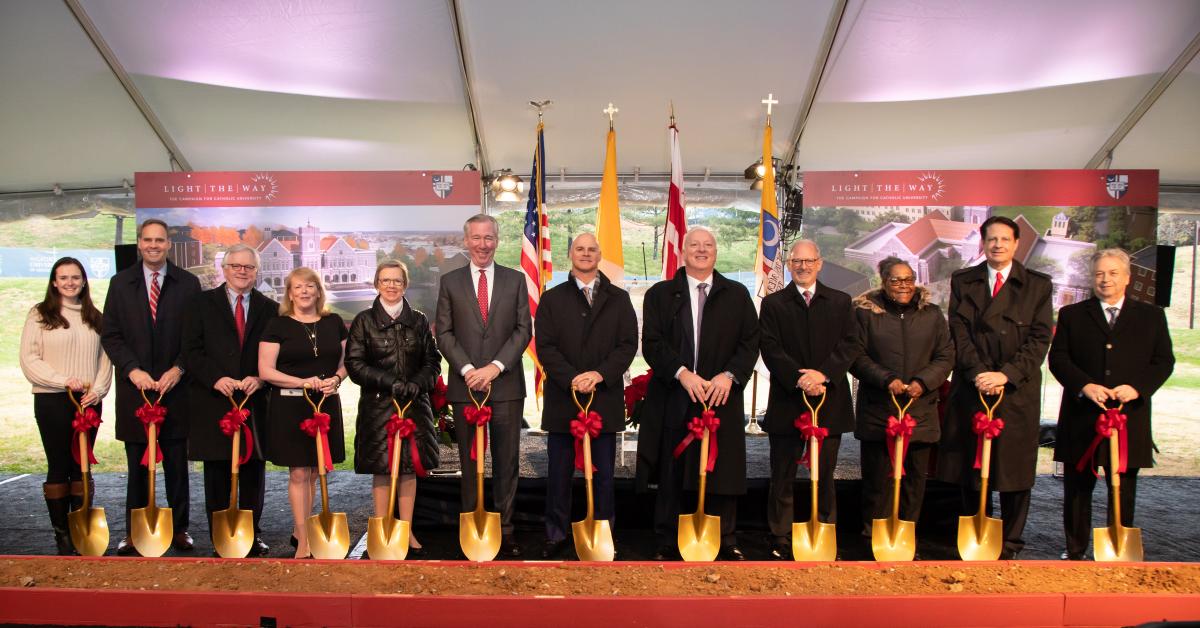 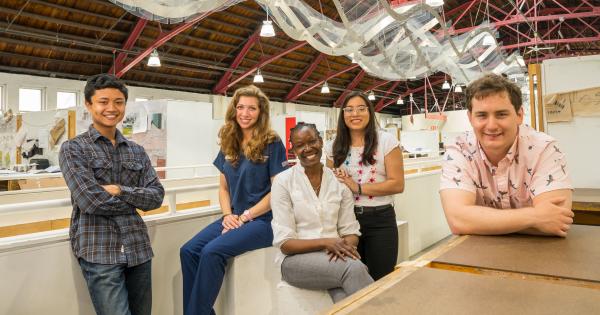 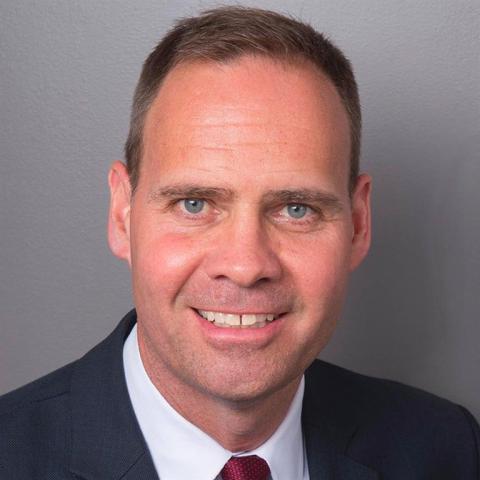